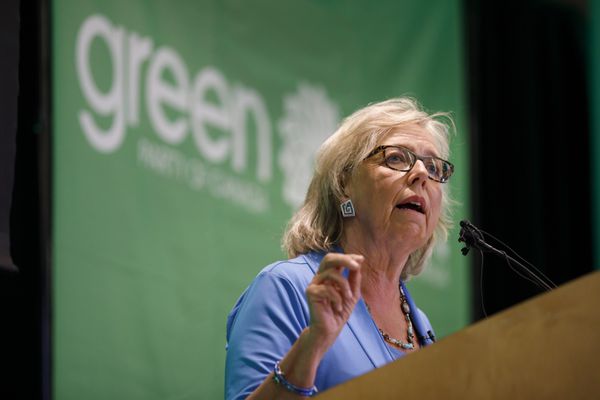 Elizabeth May, Green Member of Canada’s Parliament from the BC riding of Saanich-Gulf Islands, who led the Green Party of Canada from 2006 to 2019, is seeking her old job back. Although she is widely respected in the Party and the environmental community, her bid has caused controversy because many want a fresh start under new leadership.

The contest to find a permanent leader for the Green Party, following the failed leadership of May’s successor Annamie Paul, begins on August 31 and lasts for ten weeks.

May is running on a co-leadership model with Jonathan Pedneault, a former researcher at Human Rights Watch, who could manage much of the day-to-day administration of the party. Although this model is not recognized in the Party’s constitution, if either wins the race they would appoint the other as a deputy and they would both act as leaders until the constitution can be changed.

Long time friend and prominent environmental activist David Suzuki does not support May’s leadership bid. Although he praises her as an “outstanding politician” and “by far, the best parliamentarian we have on the issues of climate as well as social justice”, he believes that the Party should focus on forming an identity outside of May.  “She has had her run”, he said, adding that it is time for the Green Party to move on with a fresh voice to lead them.

May has indicated that the Party would benefit from having a leader with a seat in the House of Commons. She is said to have entered the race after hearing that the only other Green MP, Mike Morrice, from the Ontario riding, Kitchener Centre, was not interested in the job. However, others suggest that she simply misses being in the public eye. Suzuki’s view is that May finds it frustrating not being the head of the Canadian Green Party because the media does not interact with her as much.

Anna Keenan, who is also running in the leadership race, welcomes May to the contest and will fully support her if she wins the nomination. However, Keenan is running because, “I think the party needs new leadership and wants to move forward and needs new energy.”  Although she has given high praise for May’s record, she adds, “I’m committed to the party. I’m not committed to my own ego.”

Quebec Green Party leader Alex Tyrell is even more critical. “I don’t think the return of Elizabeth May is positive for the Green Party and it would be one of the worst things to happen to it,” said Tyrrell. “I think it would show in the public’s eye that we’re not able to get past the personality of a single person.”  Tyrell had hoped to run for the federal leadership position himself before he was expelled from the party in July, over controversial remarks related to the Russian invasion of Ukraine.

Tyrell suggests that the contest is structured to favour an established candidate like May. “It’s a race in which people are only given 10 weeks between the announcement of the candidates and the final vote, and the candidates are blocked from sending political messaging to the membership. That gives a huge advantage to somebody who’s already well known within the current membership.”

Dimitri Lascaris, who placed second to Paul in the 2020 leadership contest and is not running this time, is also quite critical, “it would be in the best interest of the party if Elizabeth May gracefully departed the scene and moved on to other endeavors.”  He suggests that if she continues to “linger” in the power structure of the Party, she will be a problem for any other leader, as she was for Paul.