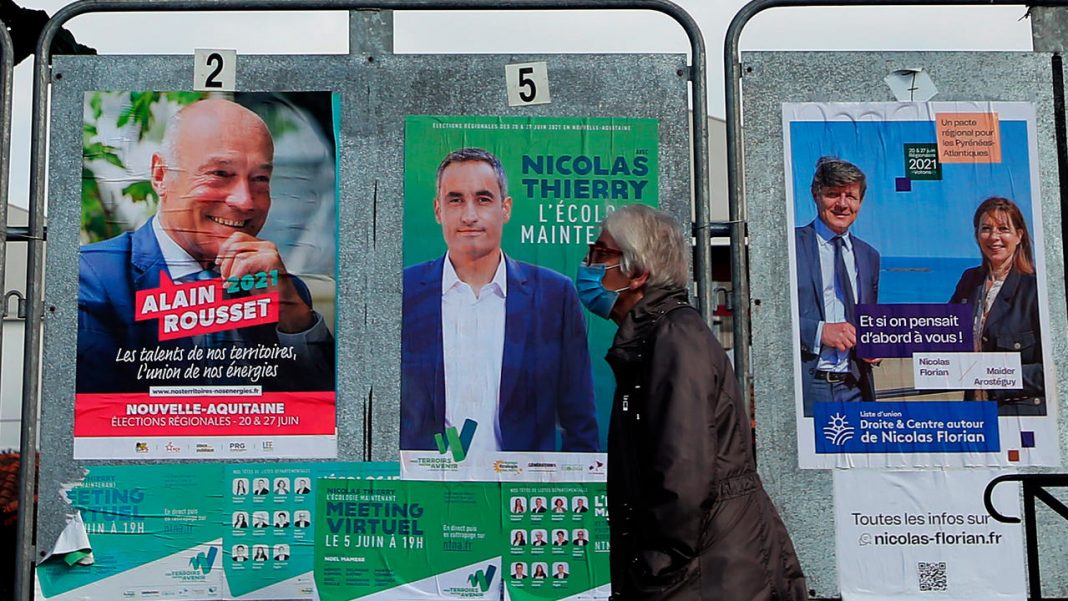 On June 20 and June 27, France held its regional elections which to put it mildly, were not like any other elections thus far. Significantly different from previous elections, the 2021 regional elections in France were marked by an all-time high of 66.72% abstention. There was a worrying rise of the far right with candidate ,Thierry Mariani, in the Provence-Alpes-Côte-D’azur (PACA) region, and disappointments for France’s Greens, who allied with the left in many regions. Most notably in the Parisian region and the Loire regions, in an attempt to defeat right-wing incumbents the Greens and the Left initially came close to winning after the results of the first round of elections.

Promising results for the Greens after the first round:

In order to halt the right-wing governments from gaining power in the Parisian region ,under Valérie Pécresse, as well as in the Loire region, under Christelle Monrançais, both from the Republican party (LR), the French Greens have allied themselves with many left-wing parties in the hope of tipping the balance in the polls. Matthieu Orphelin was presented as a candidate in the Loire region on June 21st. The Greens said in a statement that the results of the first round were promising for the alliance of the Left and the Greens.

“With more than 35% of the votes in the first round (18.70% for Ecologie Ensemble and 16.31% for Printemps des Pays de la Loire), ecology and the left are in a position to win the election next Sunday against Christelle Morançais (34.29%),” they said. They added later that “nothing was decided” and that “the match [would] really start on Monday”.

The Greens in the Loire region remained motivated and determined against the Republican Party during their campaign, achieving the highest scores at national level for the French Green party. “The Loire region can be the only region in France to switch to the ecology and the left,” they announced in a statement. “The citizens’ and ecologists’ list L’Écologie ensemble, solidaire et citoyenne (Ecology Together, Solidarity and Citizenship) has achieved the highest score for an ecologists’ list at national level. It is a pride and a sign that the dynamics of ecology and the left are real in our beautiful region,” they added.

Despite the defeat at the ballot box, a strong Green presence is assured:

Despite the efforts in the Loire region and Parisian regions, the Greens failed to succeed against the right government, with Monrançais and Pécresse both re-elected in their respective regions. However, the EEVL, in Parisian region were pleased to see on social networks a non-negligible Green presence in the new assembly of the Regional Council of Parisian and other regions of France. “You can count on twice as many Green regional councillors for the next 6 years!”, they announced on Twitter after the election results last Sunday. “Some people like to underestimate the performance of the ecologists,” said Esther Benbassa on Twitter. The EEVL senator from Paris said that compared to 2015, the Greens’ progress is clear:

“We are making our way, and we will not lack elected officials. This will put a lot of stones in the shoes of some regional and departmental council presidents,” she announced on Twitter.

A presence deemed urgent and necessary by the party:

Regional presence, even if less important than initially desired, is considered important and necessary by the Greens. In their fight for political victory against the values of the far-right party Rassemblement National as well as the urgent environmental issues in France. The Green’s remain in the shadow of the far right in some regions, and as global warming commitments are still being delayed by the current government under Macron France’s Greens are trying to find their way into French politics from which they are currently sceptical.

The record abstention rate is worrying some in France; with 87% abstention for 18-24 year olds. France is wondering if this means a lack of interest in politics among young people, and how this should be interpreted for the 2022 presidential elections. However, Esther Benbassa, EEVL senator for Paris, expressed her confidence in France’s youth on the set of TV5 Monde on July 1st, 2021. “The current abstentionism has shown us that people want content,” she said. “They also want the left to exist, not to be torn apart. According to Benbassa, current French politics must renew itself in order to match the new functioning of its voters, and stop categorizing young people who feel limited in their choices.

“Young people are no longer for the parties, but they are no less civic-minded. They are involved in associations, they go on humanitarian missions, they march for the climate. They don’t have the same idea of politics as previous generations; let’s make them want to do politics, and not cut them off by [pointing the finger] at who is ‘better’ than the other”, she said on TV5 Monde.

Hi! I am a Franco-Dutch student living in Montréal. Just graduated with a Bachelor degree in Political Science from McGill University, I have taken an interest throughout my studies in Journalism. I've worked with the McGill Tribune, the Bull & Bear and recently collaborate with La Gazette des Femmes in Quebec City. I have also been an associate editor with the McGill Historical Discourse. My areas of interest are international relations, cultural diplomacy, feminism and gender studies, environmental issues and journalism - I love to write, learn and grow and I'm exicted to work with Global Green News.

July 12, 2021
0
Green parties across the world take pride in promoting ecological progressive values and the belief in Social justice. At the 2001 Global...