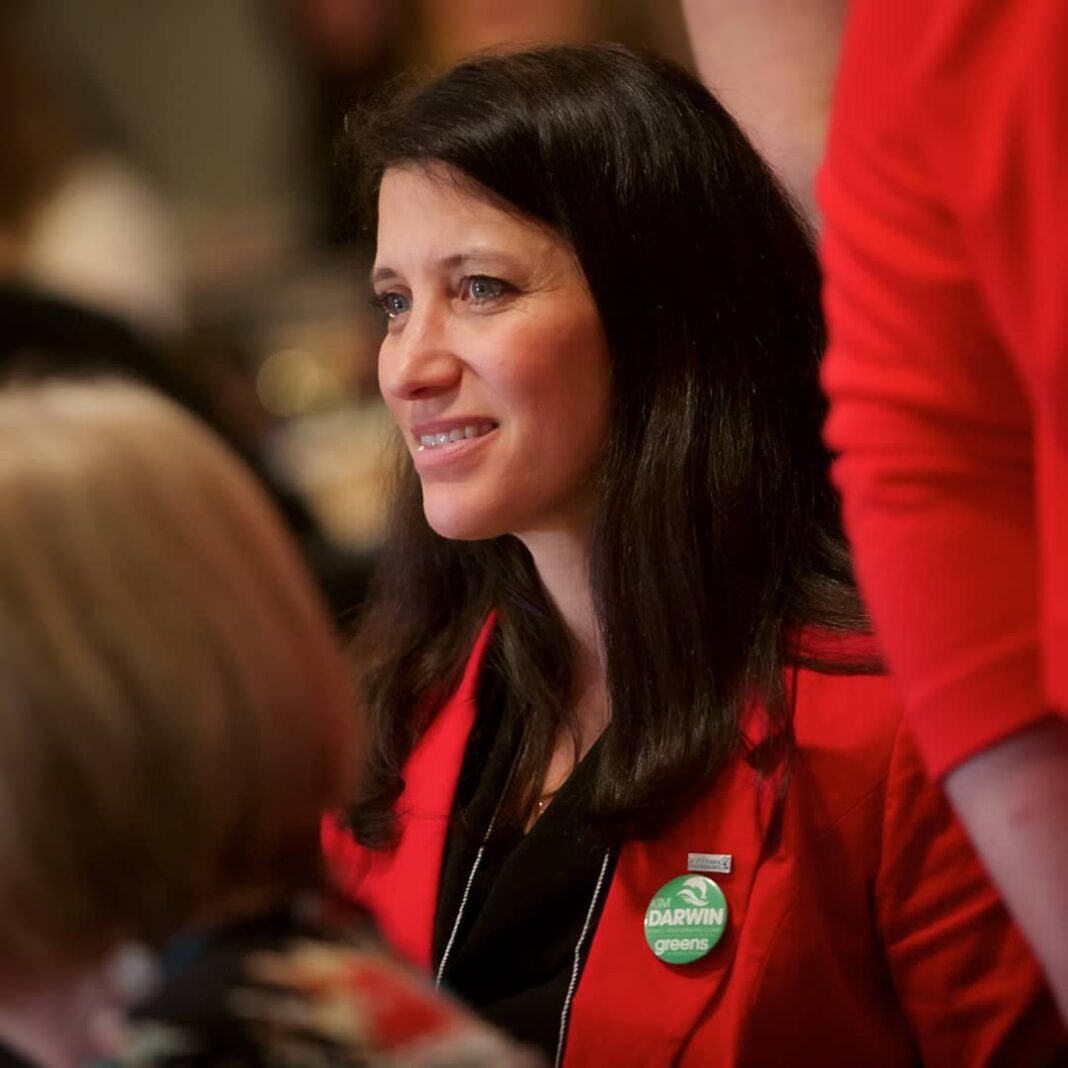 Kim Darwin, a progressive candidate for the Green Party of B.C. launched her leadership campaign and published the following statement on her website www.KimDarwin.ca

In her business and community, Kim Darwin embodies the very concept of leadership by example.

Kim is an entrepreneur, successful business owner and employer. She is also a volunteer, community worker, board member, social justice activist, champion of small business, and climate advocate.

Kim has lived on the Sunshine Coast since she was a young child and acknowledges she resides on unceded Coast Salish territory, including shíshálh (Sechelt), Squamish (skwxwú7mesh), Sliammon (tla’amin) and Kla’hoose Nations. Kim lives in Sechelt with her partner and dog, and is the proud mother to three grown and successful children.

As an independent financial consultant and in her role as a Chamber of Commerce President, Kim has gained a clear understanding of how our financial and political systems have been unduly influenced by large, corporate interests. She is a seeker of solutions. In an effort to promote a better economic value system, she co-chaired a Community Futures Loans & Investment Committee, adjudicating loans for social enterprise organizations. These loans fund B-Corps and businesses who have triple bottom line approaches, highlighting a positive social, environmental and economic benefit, aligned with the UN Sustainable Development Goals.

Kim is a passionate advocate for equality, climate justice and progressive, sustainable social policies that raise the standard of living for our most vulnerable.

Shortly after joining the BC Green Party in 2014, Kim was elected as Provincial Council Secretary and then as Vice-Chair in 2019. Through these and many other committee roles, she worked to lead and support the Party through a period of tremendous growth. The BC Green Party has recognized Kim’s achievements on several occasions.

In 2016, Kim was the recipient of the “Rising Star” Green Globe award. In 2017, she received the Outstanding Service award and in 2019 the Volunteer Appreciation Certificate for her efforts on the Pro Rep referendum campaign where she personally called over 900 British Columbians in a matter of days. Although disappointed in the provincial Electoral Referendum results, Kim is proud that her riding voted in favour.

In 2017, Kim ran as the BC Green MLA Candidate for the Powell River – Sunshine Coast riding where her team doubled the party’s 2013 vote share. Kim plans to build on this success and seek the candidacy again in the 2021 election.

After the 2017 election, she co-founded and became President of the Powell River Sunshine Coast Riding Association. Under her leadership, the riding association has continued “green” community outreach and engagement, including work on the Pro Rep Campaign where their efforts led to their riding voting in favour of electoral reform.

Although it may be unusual for a Green Party member to be President of a Chamber of Commerce, Kim not only believes one must have their voice at the table to effect change, but she believes passionately that the voice of the BC Green party must be at the table. Her prior legal experience provided excellent skills for policy development. In an effort to commence a just transition to a sustainable economy, she authored a Chamber policy calling on the government to invest in clean technology and renewable energy. In 2015, the BC Chamber adopted the policy as written. After much negotiation and compromise with the Alberta and Ontario Chamber caucus’, her policy passed at the national level.

During the housing affordability crisis that reached a tipping point in 2016, Kim authored a further BC Chamber policy calling on the province to properly gather data regarding non-resident property purchases, so housing legislation could be made based on evidence as opposed to rhetoric. In addition, she co-founded and chairs the Workforce Affordable Housing Society.

Through her role as president of the Chamber of Commerce, she interacted with many elected officials, premiers and cabinet ministers at a variety of events. It was one such event, where Andrew Weaver was guest speaker, that led Kim to join the BC Green Party. The BC Green evidenced-based decision-making approach, as opposed to decision-based evidence-making, was a message that instilled a trust she felt was lacking in other political parties.

In her capacity as Policy Chair and President of the local Chamber of Commerce, Kim accepted an invitation by Canadian Association of Petroleum Producers (CAPP) to tour the tar sands of Fort McMurray. This tour allowed her to witness first hand the devastation the industry has wrought on the Alberta landscape and citizens. In discussion with the President and CEO of CAPP and President and CEO of Syncrude, she was able to discuss and question the negative effect the Trans Mountain pipeline would have on Alberta’s job market and BC’s environment. It fueled her determination to find solutions to transition to clean technology and renewable energy. She is a strong supporter of the Alberta organization, Iron and Earth, which is a worker-led not-for-profit, committed to empowering oil and gas, coal and indigenous workers to build a renewable energy economy. She continues to support a renewable energy economy where all workers and Indigenous land owners are consulted and engaged, and where UNDRIP is upheld in its true spirit.

As an active, engaged and  concerned citizen, Kim was a registered Commenter in the disappointing National Energy Board Trans Mountain hearings and an intervenor in the BC Utility Commission Smart Choices Program.

Kim has studied western herbal medicine, traditional chinese and ayurvedic medicine for over 20 years. For four years, she held a hobby job working for a herbal medicine company where she grew and wild-crafted many of the herbs used to make high quality natural medicines. Through the wisdom of these ancient herbal practices, she lives a life that is closely connected to the natural world and its life-giving force. She recognizes much of the climate crisis and social inequity issues we face are a direct result of humans forgetting our interconnectedness with the natural world in which we live and rely on.

BC Greens’ Sonia Furstenau and Adam Olsen on Old-Growth Protection

BC Greens Call to End Logging of Old-Growth