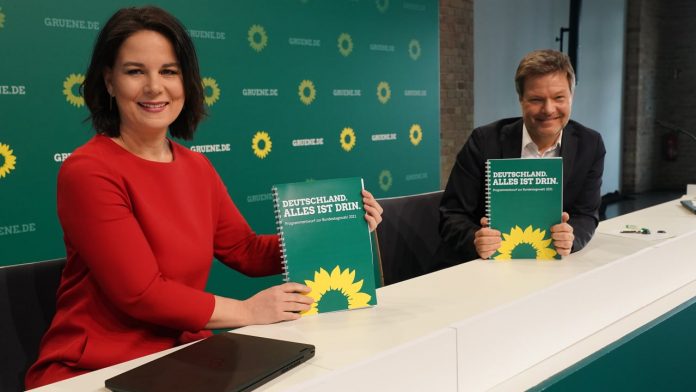 Ahead of September’s national election, the Green Party of Germany presented, on March 19, 2021, the draft of their election manifesto. The program proposes more action towards climate protection such as a faster exit from coal, raising carbon prices and more investment for infrastructure.

Previously, the party only participated in a coalition government from 1998 to 2005. It has traditionnally been running second in polls behind Chancellor Angela Merkel’s Christian Democratic Union (CDU). However, the party’s support has now roughly doubled in the polls since the last national election. With Angela Merkel stepping down as chancellor, the Greens may actually have a chance to be elected.

Now, the party plans to make its claim to the chancellery this year. It is also expected to choose a candidate for chancellor in the upcoming weeks.

In view of the worsening climate crisis, the Greens are calling for a faster reduction of carbon dioxide (CO2). To this end, the party declared the the program would follow the ambitious requirement of the Paris climate agreement to limit the rise of the global temperature to 1.5 degrees Celsius.

First and foremost, the party aims at completing the country’s exit from coal-fired power and reduce the CO2 emissions by 70 percent by 2030. The party thus wishes to increase the price charged per ton of carbon dioxide to 60 euros in 2023.

Furthermore, the Greens are calling to reduce the amount of levy used to fund renewable energy, since it increases the population’s electricity bills. Instead, the party would offer the funds raised from CO2 charges to its citizens in the form of an “energy bonus” that would relieve low earners.

The party’s program is also planning to modernize the country through an “investment offensive increase”. Indeed, an additionnal 50 billion euros per year (which is double what the current government is spending) would also be invested in climate-neutral infrastructure. This includes more charging stations for e-cars, the expansion of the railways and fast internet.

What do the Greens have to say about their plans?

For the German Green party leader Robert Habeck, the governing parties are “flagging and tired” after all these years in the coalition. In fact, according to Deutschlandfunk, Habeck affirmed that Germany seems “saturated, tired, reluctant to change, even mediocre”.

The ambitious Green program would therefore be the “vitamin shot” needed to ensure the prosperity of the country. Co-chair Annalena Baebock even delcared that the plan underlines “the Greens’ comprehensive claim to leadership for the breadth of society”.

The ecological restructuring of the economy is also taking up a lot of space in the Greens’ draft. In the next few years, “industry can move into climate-neutral production,” said Katharina Dröge, the economic policy spokeswoman for the parliamentary group. “We want to create a circular economy that relies on repairing and recycling instead of wasting valuable resources as garbage.”

How do others perceive the Greens’ election manifesto?

In recent years, the left-leaning party has made increasingly more alliances with center-right parties. This has left some activists complaining about the lack of rigour and aggressiveness of the party.

For example, Fridays for Future (FFF) climate activist Jakob Blasel told the editorial network in Germany that the proposal to increase the CO2 price was “far too unambitious”.

On the other hand, Lars Klingbei, Social Democratic Party (SPD) General Secretary, praised the Green election program as the basis for a coalition without the Union. “When I look at the draft by the Greens, I see some programmatic overlaps,” said Klingbeil to WELT. “From the investment program to a twelve-euro minimum wage to basic child security. These are good signals for majorities beyond the ambitious Union.”