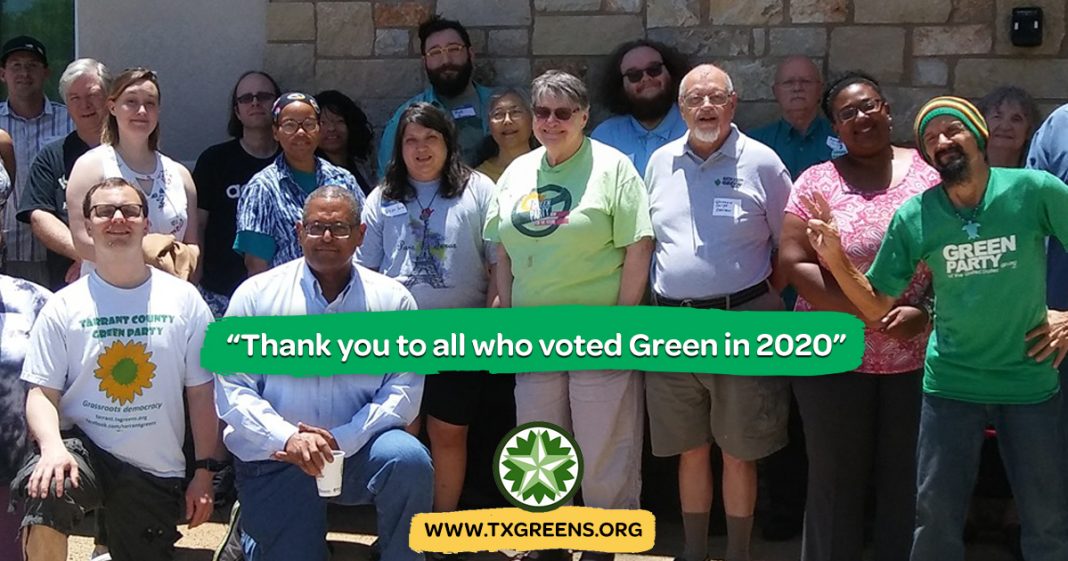 The Green Party of Texas (GPTX) opened its November newsletter with a big thank you to those who voted Green in last month’s presidential elections in the United States. Reflecting on the imminent change of government in the American White House in favour of the Democrats, the Texan Greens pondered the idea that the climate catastrophe continues to pose a threat to humanity and regretted America’s “short-sighted pursuit of safeguarding the status quo.” (https://www.gp.org/november_newsletter_post_election_edition)

Celebrating the more than 128,000 individual voters across the state of Texas who stood for a Green agenda during the November 2020 US Presidential Elections, the Texan Greens observed, in a hopeful spirit, that the public indeed appears to be “receptive” to the Green message and active campaigning.

Offering a short list of what the GPTX accomplished this year, the Texan Greens highlighted their success in supporting Green candidates with a group graphic that was used for social media and signage.

Most importantly, in the post-election edition of its November newsletter the Green Party of Texas celebrated, above all, retaining ballot access through to 2026, noting that “by holding the door open for progressive candidates to access the ballot without competing in a crowded Democratic primary”, the Texan Greens effectively act as “a pressure point to force issues into the public debate”.

Looking at the future with bright hopes, the Texan Green Party closed its November newsletter with a plea for Texans to help the Party improve by promoting the Party’s candidate recruitment effort throughout 2021. Recognizing voter involvement as the key to the Party’s success, the Texan Greens encourage those interested to tune into the Party’s monthly “Eco Social” Zoom meetings to connect and discuss with other Greens. More information on how to get involved with the Texan Greens can be found on their website (http://www.txgreens.org/join).

Other Green Parties across the United States had little to celebrate in comparison to the GPTX, as a number of them faced unprecedented difficulties relating to ballot access in last month’s presidential election. The case of the Green Party of New York (GPNY) stands out as particularly severe, owing to the passage of a highly questionable law by the New York State legislature that more than doubled the threshold to maintain ballot access and tripled the petition signature requirements for Parties in the state. (https://ballot-access.org/2020/04/02/new-york-state-legislature-again-passes-restrictive-changes-to-ballot-access-laws)

On April 1 the state legislature in New York passed a series of highly restrictive changes to ballot access laws that had been invalidated the previous month by a State Supreme Court. The unprecedented move by the New York State legislature was seen by many, including several Green and independent Parties, as blatantly “anti-democratic”. (https://www.gp.org/green_party_fights_on)

Since 1936, minor political parties in New York have been required to obtain 50,000 votes for their gubernatorial candidate every four years in order to achieve and maintain ballot status. The GPNY achieved ballot status in 2010, and has since maintained it. Following the state legislature’s move, however, the requirement to achieve and maintain ballot access was increased from 50,000 votes to 130,000 votes every two years instead of every four. As seen by the Green Party of North Carolina (GPNC), this new law was aimed “specifically to knock the Green Party off the ballot in future local and federal elections”.

As a matter of fact, case law clearly holds that states may not increase the number of signatures required for ballot access during an election year. The Greens in New York did not meet the new threshold required to retain ballot access in the State of New York as a result of this new law, triggering the New York Greens to team up with the Libertarian Party of New York (LPNY) in order to file a Federal lawsuit in the Southern district of New York to invalidate the restrictive ballot access provisions that disrupted the course of the November 2020 US Presidential Elections for many Green and independent voters. The New York Greens have also filed for an injunction to stop any changes to its Party status until the suit is settled. (http://www.gpny.org/green_party_and_libertarian_party_file_joint_lawsuit_fighting_ballot_access_restrictions)

Moreover, the Covid-19 crisis also complicated ballot access for many Green voters across the United States, as contended again by the North Carolina Greens, given that the public health guidelines in place to curb the spread of Covid-19 across the country “greatly complicated petitioning”, allegedly contributing to Green ballot line losses nationwide.